“Beyond Brexit” – A Book Review 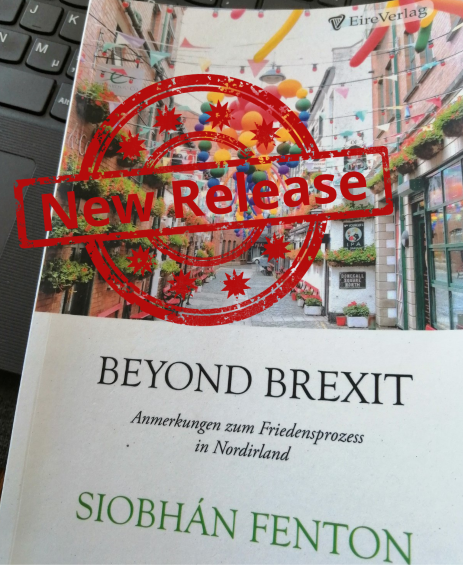 “The Good Friday Agreement“ by Siobhán Fenton has recently been published in German under the name “Beyond Brexit“. When the publisher Eire-Verlag asked me to write a review I was delighted and felt honoured. Northern Ireland with its troubled past has interested me since my first visit to Belfast in 2008. All the more since Brexit, the English exclave in the Republic of Ireland is back in the international news focus. I was staying in Dublin for a six months internship in 2008. During that time I got to travel the island a good bit – including Northern Ireland. I didn‘t know much about its history, or the Troubles. At most I had a vague picture of car bombs and masked men from the news stations back home in Germany.

Only ten years before, in 1998, the Good Friday Agreement had been signed to mark the official ending of the Troubles. No time at all in the eyes of history. And just a two hour plane ride from my home country Germany. Yet there I was about to visit Belfast, not knowing what to expect. As an intern of an Irish incoming tour operator, I had no doubt that I was going to be safe as a visitor. We were sending tourists to Belfast on a daily basis. I was more nervous I might be asking the wrong questions or to step on somebody‘s toes with being too curious. The last thing I wanted was to be a nosy, ruthless tourist, exploiting other people‘s tragedies for entertainment. However I couldn’t wait to see Belfast, a place of such recent and troubled history.

From a Whistle Stop to a University Assignment

During a black cab tour I got my first touristic insight into the Catholic and Protestant quarters of Belfast with their accordant history. Afterwards I was even more keen to learn about the roots of the conflict. I started reading novels and non-fiction books about Northern Ireland, and watching movies and documentaries. I became obsessed with everything labelled “Troubles“. Eventually I put all my research to use in a university assignment about the Impact of Terrorism on Tourism using Northern Ireland as an example.

When I recently started reading “Beyond Brexit“ I remembered how much that topic had once interested me. I realised that I had somehow stopped taking an interest in history and politics of my country of choice since I moved to Ireland in 2014. All the more I embrace “Beyond Brexit“ as an opportunity to dive into that fascinating part of history anew. Even without previous knowledge of Northern Ireland‘s situation, Siobhán Fenton‘s book is a great choice for everybody interested in it. It starts with a compact synopsis of historic events which sets the basis for Siobhan‘s analysis of the current situation. Even as a professional journalist like Siobhán it is impossible to give a complete and entirely objective narration of events. Considering her background and how closely the Troubles affected her own life, readers will certainly expect some personal input.

Nevertheless, Siobhán states at the beginning of the book that she won’t be taking sides. Born to a Catholic mother and a Protestant father it wouldn’t be easy for her anyway. Her parents saw themselves forced to move to England as their so called mixed marriage wasn’t socially accepted in Northern Ireland. The family returned to Belfast when Siobhán was 3 years old and the Good Friday Agreement had just been signed.

Following the historical outline of the book, Siobhán tackles topics currently prevalent in Northern Irish society. She describes the trans-generation trauma caused by the Troubles, its consequences seen in the still divided social life and the overall inequality in Northern Ireland.

Not on the same Page

Holding a degree in Gender Studies, Siobhán particularly focuses her analysis on what impact the conflict had on women, claiming that this had been neglected in previous studies. When abortion was legalised in Northern in 2019, Siobhán was actively involved in the pro-abortion movement. As a pro-life supporter and conservative person my opinion certainly differs from Siobhán‘s in many regards. However “Beyond Brexit“ is giving me the opportunity to challenge my perspective against the background of such unique historic circumstances. I trust Siobhán‘s work as a journalist and as someone looking to process her own past, that by compiling relevant information and doing adequate research she is providing her readers with a qualified insight of the current social situation in Northern Ireland.